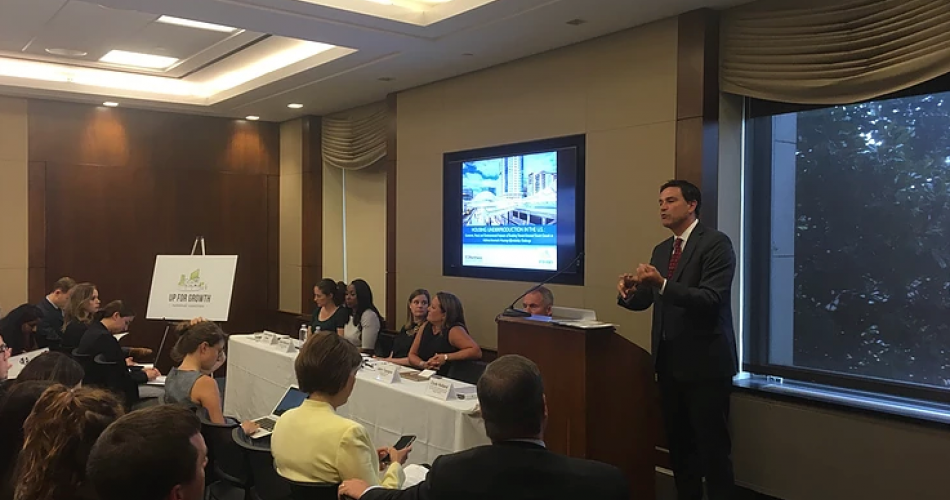 WASHINGTON, DC – The American housing shortage is approaching crisis-levels, according to panelists who participated in a housing briefing on Capitol Hill, hosted by the Up for Growth National Coalition. Panelists spanned the housing spectrum: housing developers, economists, affordable housing advocates and developers, and city planners. The panelists discussed the United States’ severe housing shortage – pegged at 7.3 million units – as well as potential policies for solving it. Rep. Denny Heck (D-WA), who chaired the New Democrat Coalition’s Housing Task Force that recently released its “Missing Millions of Homes” report, moderated the panel discussion that took place in the Rayburn House Office Building. Rep. Heck was joined by Rep. Cathy McMorris Rodgers (R-WA) and Rep. Steve Stivers (R-OH), an indication that housing can and should be a bipartisan issue.

“For too long, the growing housing crisis has been ignored outside of the coasts, but it is indeed a nationwide problem,” said Clyde Holland, CEO of Holland Partner Group and Chairman of the Board of Up for Growth National Coalition, who recently penned an op ed in Morning Consult on the housing crisis. “I hope today’s Congressional briefing spurs a serious conversation about how we can address something as important as housing. Few issues impact as many aspects of public policy as housing – the economy, the environment, employment, land use, and social services, to name just a few. We need 12 million more units of housing, including three million affordable units, by the end of the next decade. We need to build this new housing the smart way.”

Up for Growth National Coalition was formed earlier this year to bring together diverse stakeholders to advocate for transit-oriented development policies at the federal level. In April, the Coalition released its report entitled “Housing Underproduction in the U.S.,” which determined that from 2000 – 2015 the U.S. fell 7.3 million units short of meeting historic housing demand. The shortage was felt in 22 states and the District of Columbia, from California to Maine, New Mexico to Michigan. The shortage is responsible for increasing rents, slowing economic growth, and increasing CO2 emissions and cars on the road. “Homebuilding isn’t keeping up with growth,” read the Wall Street Journal headline on the report.

“The time is now,” said Make Room USA President and CEO Ali Solis, who is also an Up for Growth National Coalition Board Member. “The affordable housing crisis can no longer take a back seat to other issues. With over 25 million Americans struggling to pay rent and housing costs continuing to rise, making homes affordable must be a top national priority. Through bipartisan support, solutions to the United States’ severe housing shortage can be put into action. I’m honored to represent Make Room and be part of the Up for Growth National Coalition, which is at the forefront of identifying policy changes that will help curb the rental housing crisis and create safe and sustainable homes for all Americans.”

“I am grateful Up for Growth National Coalition has brought us all together today,” said Liz Osborn, Senior Director of Congressional Relations of Enterprise Community Partners. “Up for Growth is made up of a diverse range of stakeholders – not just housers — all dedicated to making sure everyone has a safe stable place to live. Housing is important, particularly because it can serve as a platform to improve health outcomes and enable educational and economic opportunities. However, a family spending too much on housing is forced into impossible economic decisions. Unfortunately, that is what is happening now for millions of families across the country. We can and must do more to ensure that every American has a quality and affordable place to call home.”

Up for Growth’s research and the Congressional briefing also touched on policy solutions to address the housing shortage and affordability crisis, focusing on a “smart growth” approach to development. This approach would allow for denser development within ½ mile of transit stations, creating livable and walkable communities that many in younger generations desire. Existing federal housing and transportation programs can and should be used to incent state and local government to enact policies that encourage this type of development – through by-right approval of projects, impact fee recalibration, and financing measures that create affordable housing options. Taking these steps will increase the number of homes built in America, while improving broad affordability.

One thing is clear: housing will continue to increase in political importance. As The Atlantic’s CityLab noted in a recent story about Up for Growth and other organizations raising awareness of housing, “The American Housing Crisis Might Be Our Next Big Political Issue.”

Participants in the briefing were:

Clyde Holland – Chairman & CEO, Holland Partner Group & Chairman of the Board of Up for Growth National Coalition (Read Holland’s op ed on the housing crisis)

John Tapogna – CEO, ECONorthwest (Economic consulting firm that produced Housing Underproduction in the U.S. on behalf of Up for Growth National Coalition)