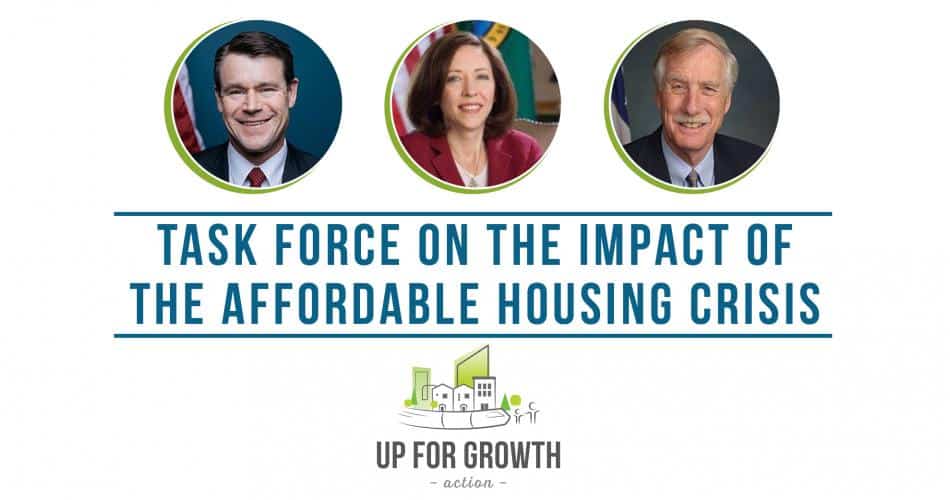 WASHINGTON, DC – The reintroduction of the Task Force on the Impact of the Affordable Housing Crisis Act is a positive step for pro-housing solutions, according to Up for Growth Action. The legislation would create a task force to examine and recommend solutions to the housing shortage and affordability crisis that impacts large parts of the country. It would also quantify the impact that housing has on other government programs and expenditures. S. 1772, which was also proposed in 2018, is sponsored by Senator Todd Young (R-IN) and introduced along with Senators Maria Cantwell (D-WA), Angus King (I-ME), and 13 other bipartisan cosponsors. Similar legislation – H.R. 3211 – was filed by Rep. Scott Peters in the House.

“The Task Force on the Impact of the Affordable Housing Crisis Act is the type of innovative approach to housing policy making that has long been lacking in Washington,” said Mike Kingsella, Executive Director of Up for Growth Action. “We salute Senator Young, Representative Peters, and bill co-sponsors for their strong commitment to solving the housing shortage and affordability crisis and gaining a better understanding of its impact on other government programs and the quality of life of all Americans. This task force has the potential to lead to positive changes in how the federal government approaches housing policy.”

Up for Growth Action was recently in Washington, DC for its first Policy Summit and Legislative Advocacy Conference, and just last week executive director Mike Kingsella testified about federal solutions to the housing crisis before the New Democrat Coalition’s Housing Task Force. Along with the recent introduction of the Affordable Housing Credit Improvement Act, the Task Force on the Impact of the Affordable Housing Crisis Act is another indication that Washington is waking up the to the reality that it can no longer ignore the housing crisis spreading across the U.S.