Tech Commits to Housing – What Does it Mean for Affordability and Availability? 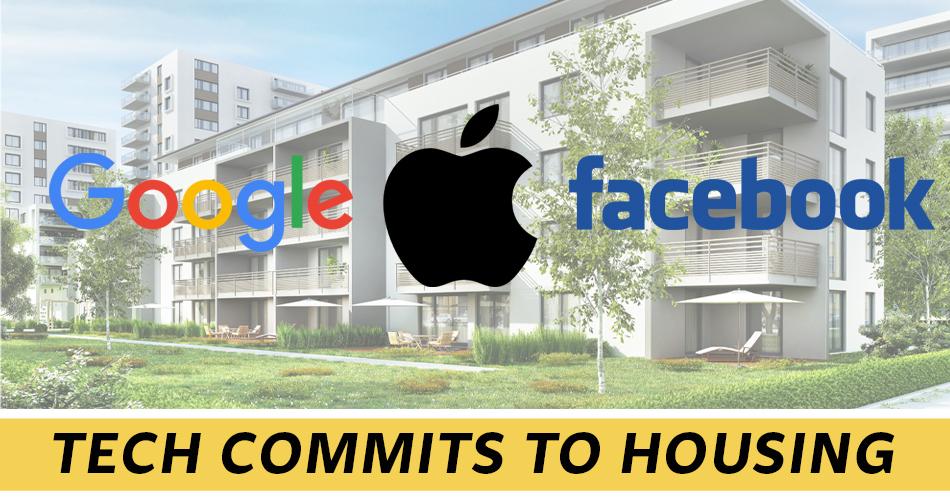 This week, Apple joined other major tech companies in making a large financial commitment to initiatives that address the housing crisis near their Silicon Valley headquarters. Apple’s $2.5 billion pledge, added to an earlier $1 billion commitment from Facebook and $1 billion from Google is a recognition that the housing crisis in the communities in which these companies operate is unsustainable.

These pledges should come as no surprise since the high cost of housing in tech hubs makes it more difficult to attract top talent and stay competitive with their peers. Meanwhile, communities in which these companies are located are losing critical workers – including teachers, firefighters, nurses, and retail staff – who are forced to live farther away from the places they work and previously called home. The growing inequality exacerbated by high-paying tech jobs coming to a community creates new fissures in society and angst about the impact of these companies on a host of economic and quality-of-life indicators. Plus, a housing crisis holds the economy back; research from Chang-Tai Hsieh and Enrico Moretti estimates that mismatch in housing and jobs lowered aggregate economic growth by 36%.

While these pledges pave the way for robust private-public partnership in addressing housing needs, they are small relative to the enormity of the housing crisis. For example, the $1 billion pledged by Facebook creates 20,000 units over 10 years. 20,000 units is a drop in the bucket for the 3.4 million underproduced units in California and the 7.3 million units underproduced nationwide, based on Up for Growth research. While direct investment from the companies most affected by the consequences of the housing crisis is a welcome sign, it’s no replacement for enacting smart and sound policies needed to spur widespread housing construction and affordability.

The myriad factors that feed into these high costs include restrictive zoning, artificial barriers that reduce needed density, increased demand for walkable and urban environments near job centers, and disinvestment from affordable housing programs. The housing crisis is not merely a problem resulting from a lack of investment – from either the public or private sector – and that’s why private investment alone will not solve the problem, no matter how robust. Largescale policy reforms at every level are necessary for addressing the housing affordability crisis.

I was asked to comment on what these investments mean for housing the in the Bay Area, as well as why these companies are making 10-figure commitments in a resource that is not directly related to their core business function. As I told the San Francisco Business Times, “when it takes a significant investment to spur housing supply to meet housing demand, it’s clear there is something fundamentally broken in the housing ecosystem.”

While there is still much to learn about the specific of these companies’ forays into housing, they should take a page from the Microsoft example and how the tech giant approached housing affordability near its Bellevue, Washington headquarters. In addition to investing significant $500 million into affordable housing in the Puget Sound region, at the local level, the company secured commitments from nine mayors from around Seattle to tear down barriers to affordable housing construction such as exclusionary zoning. Microsoft also supported housing reforms state level, including backing Up for Growth Washington-backed legislation that would extend the state’s MultiFamily Tax Exemption, which creates affordable units in market-rate developments.

Microsoft understands that direct investment in housing can only go so far if it’s not coupled with state and local policy reforms that would make it easier for the private sector to build market-rate housing and free precious resources for more affordable development.

At the federal level, additional resources need to go toward creating innovative solutions and bolstering existing programs that ensure that affordable units are accessible for low-income households, like the Low-Income Housing Tax Credit. The federal government can also play a powerful role in directing localities to take important steps toward adopting policies that will increase the availability of housing that is affordable across the income spectrum. Provisions laid out in the YIMBY Act provide a laundry list of solutions to ensure housing affordability.

The contributions from these major tech companies signal that the private sector is willing to take part in shifting the status quo in housing affordability. They can and should be a part of the conversation – employers are a vital part of the Up for Growth coalition because the cost of housing is a key factor in how they make essential business decisions – like where to grow and expand.

But these investments should come with a strong commitment to advocate for robust policy reforms that would spur housing development for people of all incomes. Indeed, such reforms would minimize the future need for multi-billion-dollar tech investments in housing.