Support Grows for the YIMBY Act 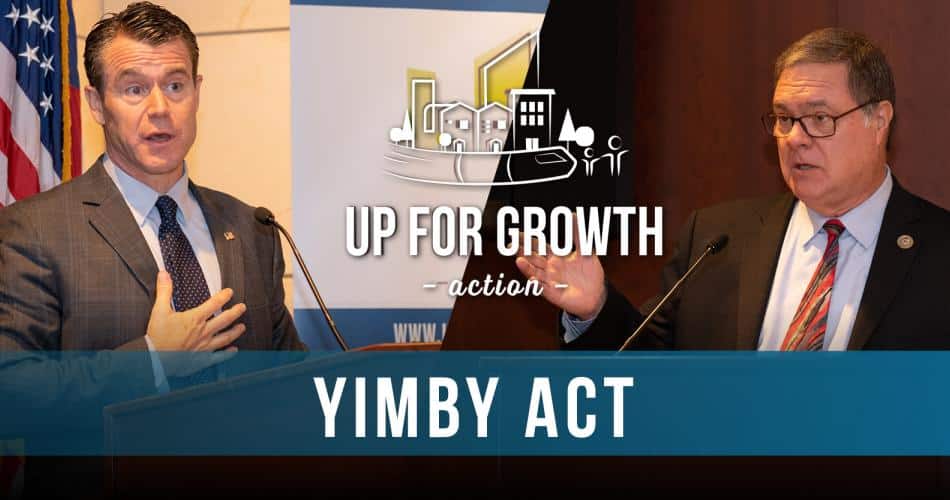 WASHINGTON, DC – Twelve organizations joined Up for Growth Action in supporting the pro-housing the YIMBY (Yes in My Backyard) Act, which was recently introduced by Rep. Denny Heck (D-WA) and Trey Hollingsworth (R-IN) in conjunction with Up for Growth’s Legislative Advocacy Day. The YIMBY Act, or H.R. 4351, requires localities that receive Community Development Block Grant (CDBG) funding to publicly report on local policies that affect housing affordability and availability. It does not require that cities take action on any specific policy; rather it gives communities the opportunity to play a constructive role in solving the housing crisis. The bill was introduced by six Members of Congress – three from each party – and has since been co-sponsored by Ann Wagner (R-MO).

“Support for the YIMBY Act is growing for a simple reason: it’s a commonsense way to advance pro-housing policies,” said Mike Kingsella, Executive Director of Up for Growth Action. “We look forward to working with the robust coalition supporting the YIMBY Act and bipartisan sponsors in both the House and Senate to ensure this important legislation to become law.”

“In addition to preserving our existing stock of housing and revitalizing neighborhoods, we need to enact policies that encourage new market-rate and affordable development in the places that need it most,” said Kris Siglin, Vice President for Policy and Partnerships at National Community Stabilization Trust. “The YIMBY Act will help because it will spur communities to examine how their current policies affect housing affordability and availability. We are proud to join a diverse and growing coalition in supporting the YIMBY Act and look forward to its passage.”

The YIMBY Act is the subject of the latest episode of the Infill podcast, hosted by YIMBY Action Executive Director Laura Foote. Foote interviewed YIMBY Act sponsor Rep. Denny Heck during Up for Growth Action’s Legislative Advocacy Day on Capitol Hill. You can listen to the podcast here.

“The housing crisis is national, and it’s time for Washington to step up, said Laura Foote. “We need proactive legislation to help jurisdictions address the housing needs of their citizens. Activists are raising the alarm about ever escalating housing costs, and this legislation takes a major first step to help reduce housing goals. The scale of the housing is going to require bipartisan action, and it’s exciting to see legislators from both sides of the aisle stepping up to address the crisis.”

Recognizing and eliminating exclusionary policies – zoning and density restrictions, onerous parking requirements, and other regulations – is an important first step in decreasing barriers to housing. The YIMBY Act will help communities recognize their own agency in the housing shortage and provide them with a framework for smarter policymaking.

The bipartisan sponsorship of this bill demonstrates the congress’ commitment to innovative solutions to improve the lives of American families. Thank you for your continued commitment to housing and to the introduction of the YIMBY Act. We look forward to working with you both to address one of the root causes of the housing crisis in the U.S.

The YIMBY Act is an endorsed bill in Up for Growth Action’s pro-housing legislative agenda. The Senate version (S. 1919) is sponsored by Senator Todd Young (R-IN) and co-sponsored by Senator Brian Schatz (D-HI). Other bills supported by Up for Growth Action include the Build More Housing Near Transit Act, the Neighborhood Homes Investment Act, the Affordable Housing Credit Improvement Act, and the Task Force on the Impact of the Affordable Housing Crisis Act.

For more information on the YIMBY Act, please take a look at Up for Growth Action’s one page summary. You can also read more on the legislation on Up for Growth’s Insights page.