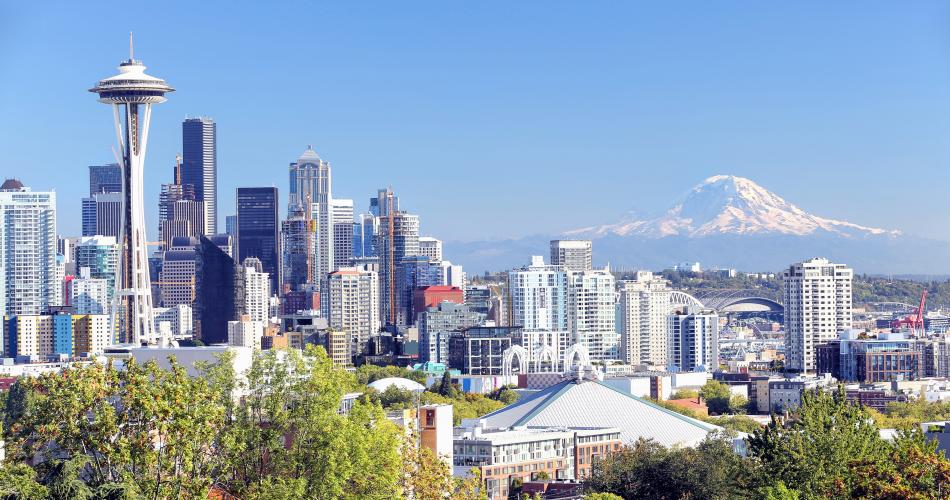 FEDERAL WAY – From 2000 – 2015, Washington state fell 225,000 units short of meeting its housing needs, according to a new report from Up for Growth, developed in partnership with ECONorthwest. Housing Underproduction in Washington State found that the housing shortage represented 7.5% of the total 2015 housing stock in the state. While the housing shortage has statewide impacts, it is felt most acutely in the Seattle-Tacoma Metropolitan area, where 48% of all renters were in the “cost-burdened” category, spending more than 30% of their incomes on housing. The report is a state-level dive into Up for Growth’s Housing Underproduction in the U.S., which determined the national housing shortage at 7.3-million units over the same time frame.

A full copy of the report can be accessed by clicking here.

“Despite steady economic and population growth, Washington State is experiencing a severe shortage of homes,” said Mike Kingsella, Executive Director of Up for Growth. “The state’s housing shortage holds back economic growth, creates financial hardships on families, and thwarts environmental sustainability. While the report should sound alarms, it also provides a clear path forward for how Washington can build the housing needed to accommodate continued growth. We hope the report is a resource for policymakers and advocates to use as they develop solutions to Washington’s housing crisis.”

The report offers a path forward to build needed housing in a more sustainable and accessible way by prioritizing denser housing near transit locations, or in job-rich but housing-poor areas. This approach would reduce vehicle miles traveled by 36%, increase gross state product by $103 billion, and boost state tax revenues by $660 million, all relative to 20-year projections based on current development patterns. The “Accessible Growth” scenario would also require only 12% of the land used to deliver homes under current growth patterns.

“From across the state the clarion call for more affordable housing is coming through with intensity,” said Marty Kooistra, Executive Director of the Housing Development Consortium, which partnered with Up for Growth to unveil the report. “Up for Growth has added the evidence which beckons a renewed urgency for bold action and with this report offers pathways for the public sector to respond. We so appreciate the clarity which we hope purges all that might separate us toward united and unprecedented action.”

From 2010 – 2017, Washington only built .99 units of housing for every new household formed, lagging behind the national average of 1.06. Over the same time period, the state added one unit of housing for every 2.24 primary jobs created. The ratio was much higher in counties along the I-5 Corridor; for instance, King County created 3.33 jobs for every new housing unit, suggesting that home construction is falling far behind economic growth. The report also examined what kind of housing is missing in Washington, determining that 181,000 missing units – or 80% of the statewide shortage – are for families earning up to 80% of area median income (AMI). This suggests that the housing shortage is disproportionately affecting lower income households.

“It’s encouraging to see bipartisan support to take more action and address our housing shortage,” said Seattle Metro Chamber CEO and former Tacoma Mayor Marilyn Strickland. “We need more housing choices at all income levels for people at various stages of their lives. Housing paired with access to reliable transit creates a more inclusive and equitable economy. This new report offers a wealth of data on the urgent need to pass policies that add more housing across our entire state.” 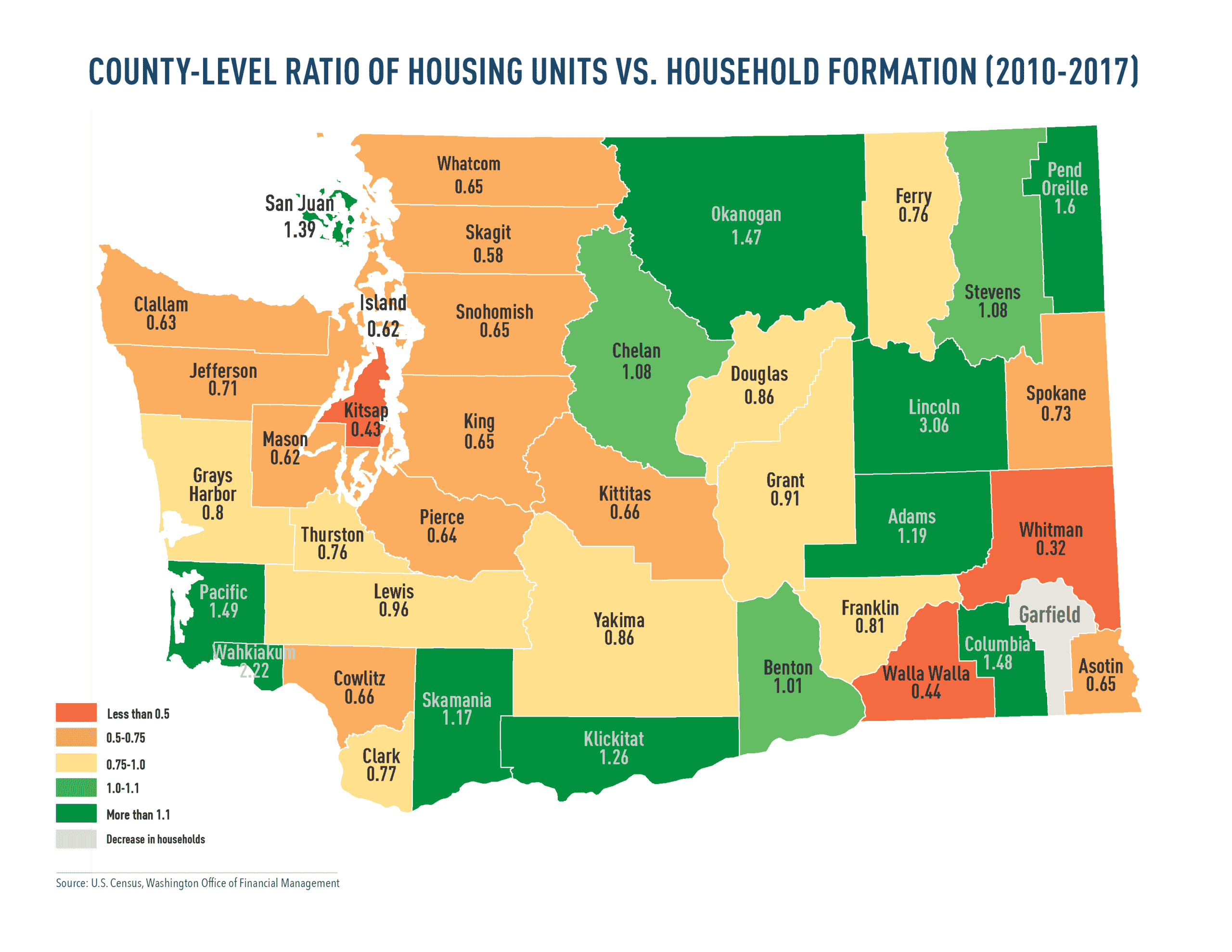 “While lawmakers made significant affordable housing investments last session, there’s still a lot more work we need to do to address the crisis,” said State Senator Patty Kuderer, who participated in a panel discussion about the report and chairs the Senate Housing Stability & Affordability Committee. “Today’s report further underscores the need to build more affordable housing. Our efforts must be thoughtful in meeting the immediate needs of all communities across Washington and reducing the chances of our state going through another housing crisis in the future. Building on the success we had in 2019, I’ll be working in the Legislature this session to increase investments and enact policy reforms that help all Washingtonians obtain stable housing for themselves and their families.”

“I am excited to continue the work with Up for Growth on developing bold policy to quickly get at solutions to the housing underproduction problem,” said State Representative Andrew Barkis, who also participated in the panel discussion. “The work that has been completed makes it very clear that we are facing a significant problem in Washington State. I will be introducing several pieces of legislation in 2020 and look forward to bi-partisan cooperation to put this policy in place.” 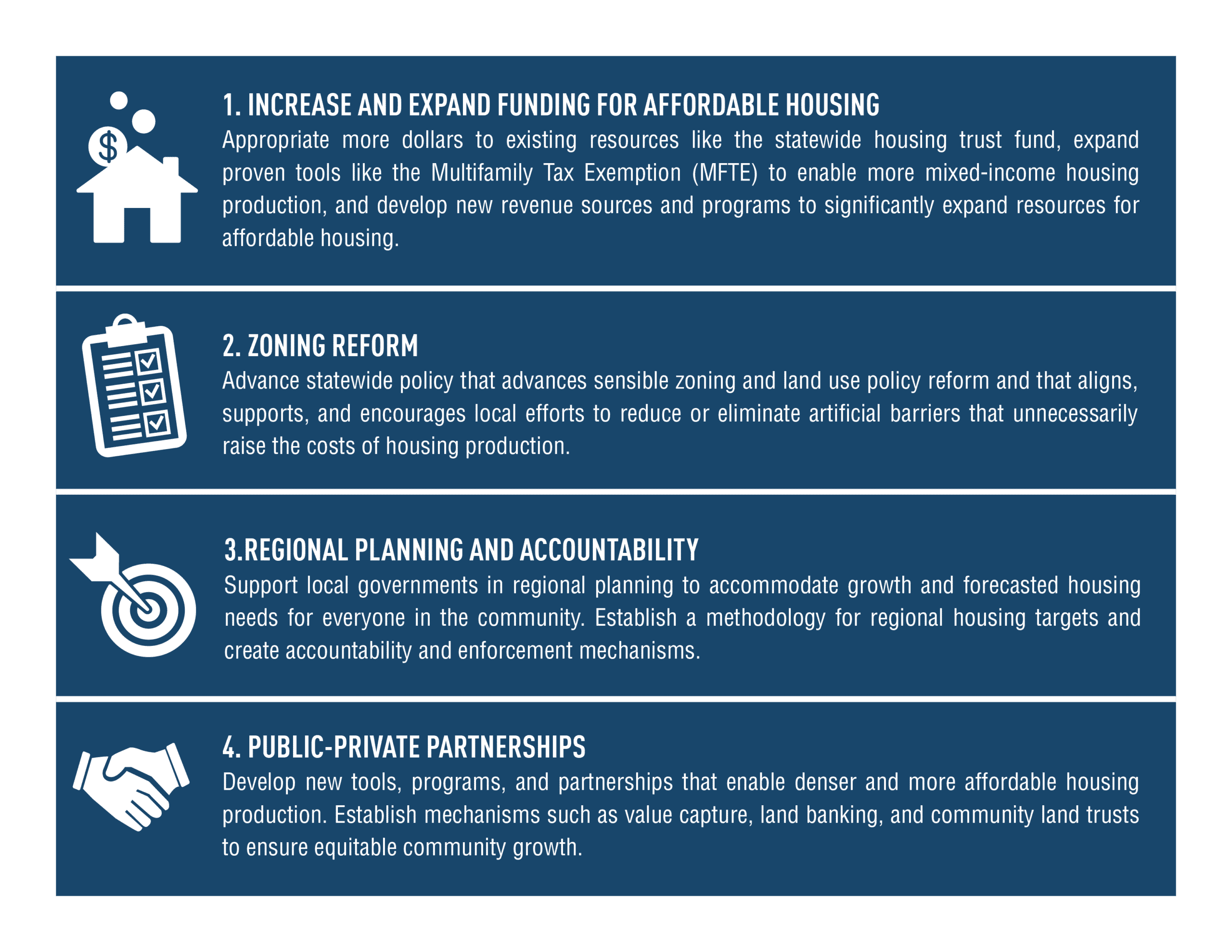