Courage at All Levels 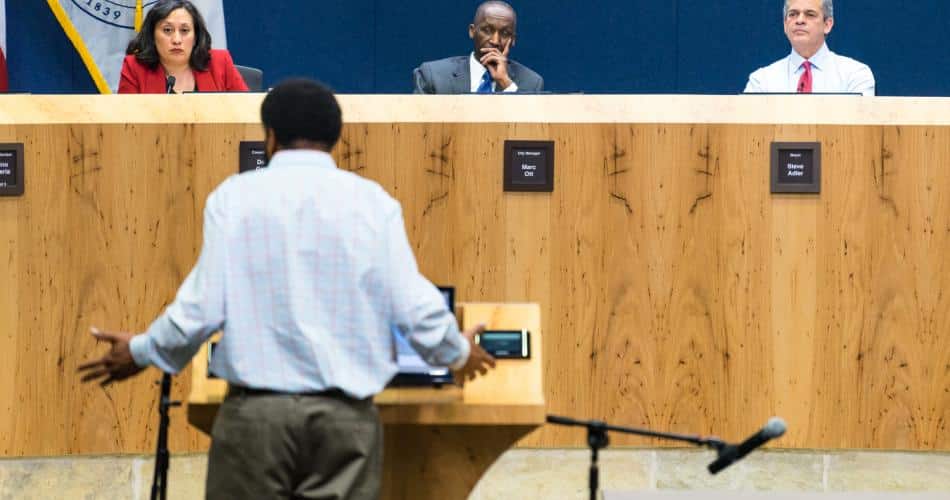 Denny Heck, Lt. Governor of Washington State, has a refrain: “Build more homes of all kinds for all our neighbors.” According to a recent public opinion poll, a majority of people agree with him, supporting housing justice measures in the abstract. But when measures to address the shortage of affordable housing, particularly zoning reform, are brought to the block level, local lawmakers often experience vocal and passionate opposition. It’s not surprising – homes exist in places, not in the abstract, and regardless of data that support the benefits of zoning reform to communities, people feel protective of their neighborhood’s aesthetic and the financial equity they’ve built in their property. Because land use is controlled at the local level, it is America’s mayors and other local policymakers braving the opposition at the front lines.

One such front liner is Culver City, California Mayor, Alex Fisch. “We know it’s right to allow people to build the homes they need to live in,” Mayor Fisch said in his keynote at Up for Growth’s 2021 Virtual Summit for Housing Changemakers in September. The most economically and culturally vibrant places in the United States are in a severe state of housing scarcity, Mayor Fisch shared. “This condition is almost entirely a political choice.” Mayor Fisch is confident the problem can be solved, but, he says, “We’ll need courage and sustained effort at each of the federal, state, and local levels of government.”

Pro-housing policymakers like Mayor Fisch know first-hand how the political economy of local government can be an obstacle to implementing change. Unlike state and national constituencies, cities and towns are small enough jurisdictions that local policymakers experience multiple potential veto points of personal interaction every day, picking up their kids from soccer practice, shopping at the local grocery store, and mingling at the Fall Festival. They are never ‘out of the office.’ Even so, positions in local government are often part-time, poorly compensated, or even done on a volunteer basis, skewing who is able to hold office toward older and more financially secure individuals. Cities themselves often do not have the financial resources to undertake researching, crafting, and implementing policy change, particularly where local governments have been defunded over the years. Off-cycle elections, held in about 75% of US municipalities, can be easily dominated by single-issue voters with the time and resources to commit to their cause. This not only creates the impression that parochial housing obstructionism is more widespread in a community than is likely the case, it presents a strategic opportunity for anti-zoning reform interest groups to have increased influence on election outcomes. Taken together, the risk to reward ratio of instituting zoning reform lends itself to local policymakers maintaining the status quo when it comes to land use. State and federal governments, with a quite different political economy, can lend a hand.

The Biden administration’s focus on housing, for example, gives moral authority and political cover to local policymakers. If the White House is talking about the origins and legacy of exclusionary zoning and the ways it continues to contribute to the racial and class inequality that runs counter to American ideals, the voices of pro-housing mayors like Fisch are bolstered and amplified. Congress can also provide needed resources. The Housing Supply and Affordability Act (HSAA), introduced in March by Sen. Amy Klobuchar (D-MN), puts money where the Administration’s mouth is, providing grant money to states, local governments, Native American tribes, and Native Hawaiian organizations to reduce barriers to housing development and increase housing affordability. Cities have limited capacity to change zoning codes that have, as Mayor Fisch puts it, evolved like tree rings over a century. “It is essential to have funding to actually dig in and change a hundred years of zoning code.” With the HSAA and other bi-partisan legislation encouraging local governments to eliminate exclusionary zoning and discriminatory land-use policies, the federal government is sending a strong signal to local lawmakers that they will support bold policy changes.

States are also moving to alleviate the housing shortage through incentives and mandates. “As we’ve seen in Oregon, California, and other states, there’s an important role for states to play,” Washington State Representative Nicole Macri (D-LD-43) recently told Laura Foote on the Infill Podcast. “We’ve allowed cities to do local zoning for a hundred years now and with that have reached this crisis point in terms of housing supply.” In early 2020, Rep. Macri, whose district includes Seattle, introduced legislation that would allow for duplexes, triplexes, townhomes, and smaller apartment buildings in neighborhoods across the state that are currently zoned exclusively for single-family housing. “If the state is to take action,” Rep. Macri told Foote, “it really helps to empower local elected officials to say, ‘The state is requiring this so we have to do it.’” This political cover is one of the most important ways that state legislation can counter local and vocal opposition to zoning reform and open the way to finding creative and equitable housing solutions for neighborhoods and communities.

It’s not only traditionally blue states that are taking strong action on this bi-partisan issue. State Senator Matt Hansen (D-District 26) introduced LB794 to Nebraska’s Unicameral Legislature early last year, legislation with a clear preemption of single-family zoning. A wide variety of stakeholders stepped up in support of the bill, and while LB794 was not ultimately passed, portions of it were amended into LB866, the Municipal Density and Missing Middle Housing Act and the Middle Income Workforce Housing Investment Act, signed into law by Nebraska’s governor in August 2020. LB866 requires cities to have affordable housing plans, something Senator Hansen calls “an affirmative duty of the city.” Cities now must submit reports to the Urban Affairs Committee of the Legislature detailing their efforts to address the availability of and incentives for affordable housing through zoning codes, ordinances, and regulations. The reports will include regular inventories of housing stock and zoning codes, data Senator Hansen believes can help advocates at the local level by providing clear facts otherwise difficult to cobble together from other sources. “You can actually look at the cities’ own numbers. It’s easier to see what is being prioritized.” The Yes in My Backyard (YIMBY) Act, currently pending action in the US Congress, also mandates transparency in local land use, zoning, and housing decisions, shedding light on exclusionary policies and ultimately encouraging the elimination of barriers to affordable housing. Senator Hansen continues to push for more state-wide coordination on housing issues in Nebraska, hoping to take advantage of the positive hearing, good press, and encouragement his initial bill received, and the momentum of pending federal legislation like the YIMBY Act that is spotlighting not only how critical the housing crisis is nation-wide, but that there are political solutions to the problem.

It’s a great time to be a local policymaker working to address the issues of available and affordable housing. There has been real energy behind grassroots issues at the municipal level – policing and housing justice in particular – that can be leveraged to counter the intransigence of the status quo. States are signaling their support for zoning and policy reform and both the White House and Congress are putting their weight behind what we all know is the right thing to do: Build more homes of all kinds for all our neighbors. With both incentives and mandates – carrots and sticks – from higher up the political chain providing financial resources and political cover, local policymakers can create opportunities for new and diverse neighbors, build more resilient communities, and make progress on long-term fiscal and environmental goals. The synergy of local, state, and federal action is what will move us toward solutions to this national crisis. Like Rep. Macri says, “We need all of it. We need it now. We can’t work fast enough.”