Biden taps Rep. Fudge for HUD Secretary. What does it mean for housing? 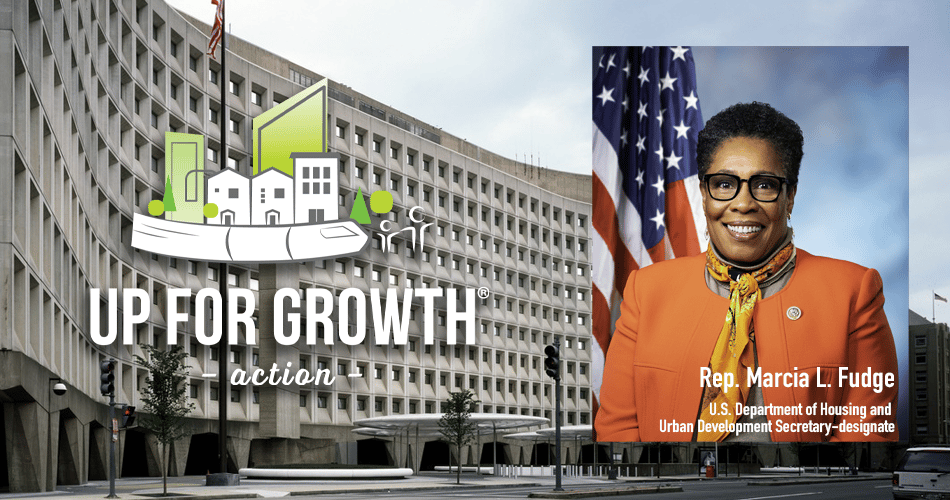 On Tuesday, news broke that the incoming Biden-Harris administration would nominate Representative Marcia Fudge (D-OH) as the next Secretary of the Department of Housing and Urban Development (HUD). The choice was a surprise. The Congressional Black Caucus, and in particular House Majority Whip and close Biden confidant Rep. Jim Clyburn (D-SC), promoted Rep. Fudge for Secretary of the Department of Agriculture (USDA). Rep. Fudge’s nomination to HUD was leaked hours after reports confirmed she would not get the job at USDA. On Thursday, the Transition formally announced Rep. Fudge’s nomination.

Her interest in USDA stemmed from her work on the Agriculture Committee and a desire to shift USDA’s primary focus from support for farmers and crop programs to the Supplemental Nutrition Assistance Program (SNAP), formerly the Food Stamp Program. In other words, Rep. Fudge believes USDA should focus on the consumer, or end-user, at least as much as the farmers and companies that grow the food products purchased through SNAP. This viewpoint is perhaps indicative of her priorities at HUD in the coming years.

Compared to some of the other candidates on the previously reported HUD shortlist, Rep. Fudge does not have a long track record of working directly on housing issues. She was first elected in 2008 to represent a district that encompasses Cleveland and some of its inner suburbs, stretching south to Akron. An attorney by trade, she was previously the mayor of Warrensville Heights, Ohio. She serves on the Agriculture, Education and Labor Committee and the House Administration Committee in the 116th Congress.

One indication of where she stands on broader housing policy is her co-sponsorship of the Up for Growth Action-backed Affordable Housing Credit Improvement Act. The legislation boosts the Low-Income Housing Tax Credit – one of the primary ways in which the federal government funds affordable housing production and a key plank of the Biden-Harris housing plan. She is not a co-sponsor of any other legislation formally endorsed by Up for Growth Action.

According to the Washington Post, President-elect tapped Rep. Fudge because she is a “voice for working families and as someone who has federal government experience and had been a mayor who dealt with HUD policies on a local level,” according to a transition official who was not cleared to speak publicly. Biden also saw her as “a longtime champion of affordable housing, urban revitalization, and infrastructure investment.” The first bullet on her page on the Transition’s website says the “driving mission of her career has been to reduce poverty and address inequality.”

Indeed, Rep. Fudge brings unique qualifications to the position. If confirmed, Rep. Fudge will almost certainly focus on reinstating the Obama-era policies gutted by the Trump Administration, such as the Affirmatively Furthering Fair Housing (AFFH) rule and the disparate impact rule. Both sought to address the impacts of decades of racial discrimination in housing but were abandoned or significantly altered by the Trump Administration. Restoring these rules and building upon them will likely be the top policy priorities for a HUD helmed by Rep. Fudge.

Reaction to Rep. Fudge’s appointment has thus far been relatively scant, which could be since the Transition only formally announced it on Thursday afternoon. She has earned high praise from home-state Senator and current Ranking Member of the Senate Banking Committee Sherrod Brown and House Financial Services Committee Chairwoman Maxine Waters (D-CA). Congressional Republicans have said little about her nomination. Still, Rep. Fudge will likely be confirmed in the Senate, barring any new and unforeseen developments during the confirmation process.

We expect to learn more about Rep. Fudge and her plans at HUD over the coming days and weeks. She will have her hands full with both long-term and immediate challenges, including ensuring that the millions of Americans struggling to pay rent and facing foreclosure or eviction can remain safely housed during the pandemic. However, her appointment clarifies that President-elect Biden views HUD as a vehicle for achieving one of his “Day One” priorities – racial equity. Rep. Fudge’s nomination should be welcome news for all who believe that racial equity cannot be achieved without housing equity. We certainly look forward to her leadership at the United States’ key housing agency.